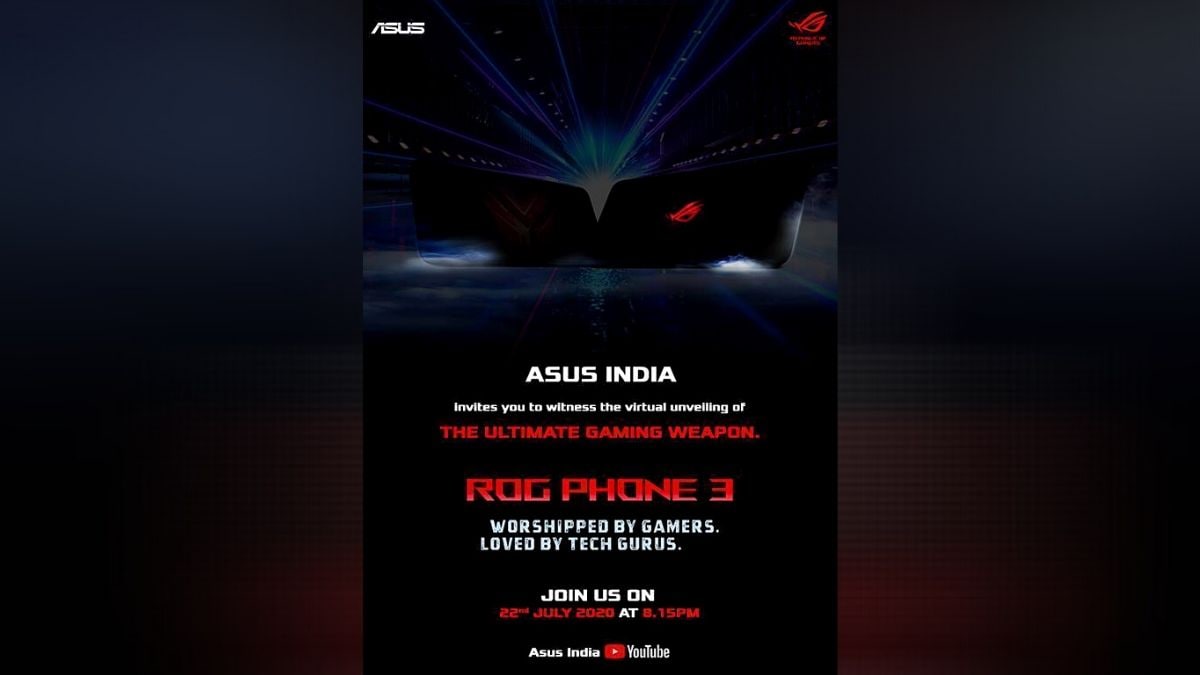 Asus ROG Phone 3 global launch will take place on July 22, the company announced on Wednesday and it will also act as the India debut of the phone. Asus has revealed that its next-generation gaming phone would pack the latest Qualcomm Snapdragon 865+ SoC. The phone is further tipped to come with up to 16GB RAM and triple rear camera setup. The Asus ROG Phone 3 will succeed the Asus ROG Phone 2 that was launched in India in September 2019.

The Asus ROG Phone 3 launch event will kick off on July 22 at 8:15pm IST. People can watch the launch event on Asus India’s YouTube channel. Other than its arrival in India, the phone will also debut in the US and European markets.

Meanwhile, Flipkart has started teasing the arrival of the Asus ROG Phone III, suggesting that the e-retailer will carry the gaming smartphone in India.

As mentioned, the Asus ROG Phone 3 will be powered by the flagship Qualcomm Snapdragon 865+ SoC. The new Qualcomm mobile processor supports 5G connectivity, ultra-intuitive AI, Wi-Fi 6E, Bluetooth 5.2, and more. Its CPU and GPU performance has also been improved by 10 percent over the previous generation (Snapdragon 865). Its CPU core can attain a clock speed of up to 3.1GHz.

General manager of smartphone business unit at Asus, Bryan Chang has also said in a statement that the full specifications for the ROG Phone 3 would be announced in the coming weeks. However, the phone was spotted on Chinese regulatory body TENAA’s website in June, tipping its key specifications.

ROG Phone 3’s triple camera setup is said to include a 64-megapixel main camera and a 13-megapixel secondary camera. Similar to the ROG Phone 2, it is rumoured to carry a 6,000mAh battery with fast charging support.

Lastly, the TENAA listing has tipped that the Asus ROG Phone 3 will measure 171x78x9.85mm and weigh 240 grams.