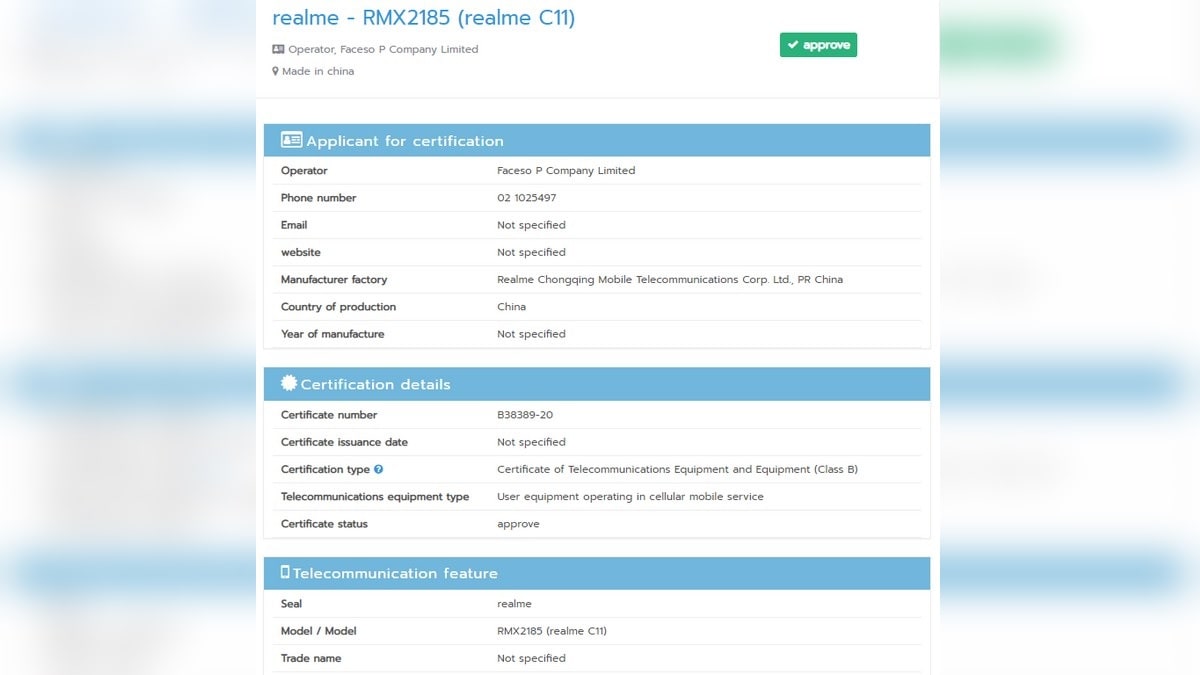 Realme C11 seems to be an upcoming addition to the C series of smartphones by Realme. The phone has been spotted on Thailand’s NBTC certification listing website with model number RMX2185 and the moniker Realme C11. While the listing does not hint at any key specifications of the phone, it does show the phone comes with LTE support, along with associating the model number with the name. The Realme C11 is among the multiple Realme phones that have been spotted in various listings online recently.

The NBTC listing for the phone states the phone will come with LTE support, which is no surprise. Being part of the C series, it will be a budget friendly offering by Realme carrying low to mid-tier specifications. It can be expected to come with Android 10 and Realme UI on top.

The listing was first spotted by GizmoChina and the publication also states that a phone with the same model number was first seen on the TKDN certification website. Since then, it has cleared various other certifications including Eurasian EEC certification and SIRIM certification, and now NBTC. Notably, none of the listings show any details about the phone and even the name has been hinted just recently with the NBTC listing.

There has been no confirmation on the rumoured Realme C11 by the company. Also, it is unclear when the phone will be launched or what the pricing will be, however, more details can be expected in the coming days.

Last week, the Realme X50t was reportedly spotted on a Google Play Console listing, hinting at the phone’s processor and RAM. The phone with model number RMX2052 is expected to come with the Qualcomm Snapdragon 765 SoC and 6GB RAM. Additionally, the rumoured Realme X3 Pro was spotted on TUV Rheinland Japan certification site last week as well. The listing hinted at a 4,500mAh battery and the phone is said to come with 50W/65W fast charging.